Opus One signed an option agreement for the Noyell Property in 2019 (acquisition of a 100% interest) and subsequently staked significant ground to the east to cover favourable ground defined by geological compilation and geophysics (IP).   OOR now controls approximately 10 km of the favorable gold bearing structure (Douay-Cameron deformation zone (DCDZ)) to the east of the Vezza mine (half of that ground is royalty free).  Directly to the west of the Vezza mine, OOR controls another 8 km of that same break (DCDZ) on the 100% owned Vezza Extension property.  On Vezza North (100% owned), located directly north of Vezza Extension, OOR also controls 15 km of strike of the favourable Casa-Berardi Deformation zone (CBDZ).

This regional play includes 18 km of the DCDZ and 15 km of the CBDZ making it a substantial and highly favourable exploration position for gold in the Abitibi.  Within this land package, OOR believes that Noyell offers the best exploration short term potential as significant drill intercepts have been obtained in the past and confirmed in OOR’s 2020 winter drilling program.

Opus controls a large land package along the Casa-Berardi and Douay-Cameron Breaks, two regional geological structures known to host mesothermal gold deposits.  On the Noyell property, the gold mineralization is observed in various geological environments: along volcanic-sedimentary contacts (ex: the Vezza mine) and within quartz injected shear zones in silicified sediments of the Taïbi Group (Noyell).

Past drilling on Noyell has outlined various gold showings in distinct geological environments.  The most promising environment appears to be related to mineralized stockworks in the center of the property. Promising historical values have be obtained in drilling such as:

In 2020, OOR initiated a winter drilling program (proposal: 10 holes, 2,500m) that was stopped after only 2 holes because of Covid 19.  With only two holes, OOR was able not only to confirm past results but to obtain one of the best (if not the best) gold interval of the region, outside the Vezza mine property.

Hole N-20-01 was drilled steeply to the north (N355, -72) to intersect the interpreted east-west striking and south dipping mineralized zones at the best angle possible.  The hole was stopped at 447 m (core length) after intersecting the two interpreted gold bearing zones.

Two other anomalous intervals were also returned from that hole:

Hole N-20-01:  The mineralized zones consist of quartz-carbonate stockworks within a wacke carrying 5-10% Pyrrhotite, 1% Arsenopyrite and 1% Pyrite.  Core angle is 55º.  These mineralized intervals are among the deepest (between 300 and 400 m vertical) ever returned from these structures in the area.  These results clearly confirm the value of those gold zones as exploration targets.  It is understood that the mineralization is wide open at depth and that it remains totally unexplored below 400 m.

Hole N20-02: The mineralization observed in this hole is identical to the one described for hole N-20-01.  The main mineralized interval is the furthest to the east known to date on this gold bearing structure at that depth (300 m).  To the east of this significant interval the ground is totally virgin for kilometers and under Opus One’s control.  The eastern extension of this mineralized structure is however well defined from a geophysical point of view.  An IP survey carried out in 2011 extends the structure for an additional 1.6 km to the east.  In addition, an IP survey carried out by Opus One this winter on newly staked ground extends the structure for another 1.8km for a total of 3.8 km of quality survey.

Opus One believes that it is on the verge of a major gold discovery along the Casa-Bérardi-Douay-Cameron deformation zones.  With only two drill holes (drilled by OOR so far) and geophysics, the company can already imagine the potential of this totally neglected portion of the Casa-Bérardi structure.  Results from hole N20-02 are probably the best ones obtained so far in this portion of the break and it is wide open to the east and below 300 m.

All samples collected during the winter of 2020 drill program were prepared and assayed at ALS Minerals (Vancouver), a certified laboratory.  Our QA/QC program consisted in the insertion of a control sample every 9 samples.  Control samples consisted in a blank as well as two certified standards (one low grade and one high grade for gold).  All samples above 5 g/t Au were re-assayed with metallic sieve. The gold value used in this report is Au-total given by this analysis.

Pierre O’Dowd, P. Geo, acts as a Qualified Person as defined in National Instrument 43-101 and has reviewed and approved the technical information in this publication. 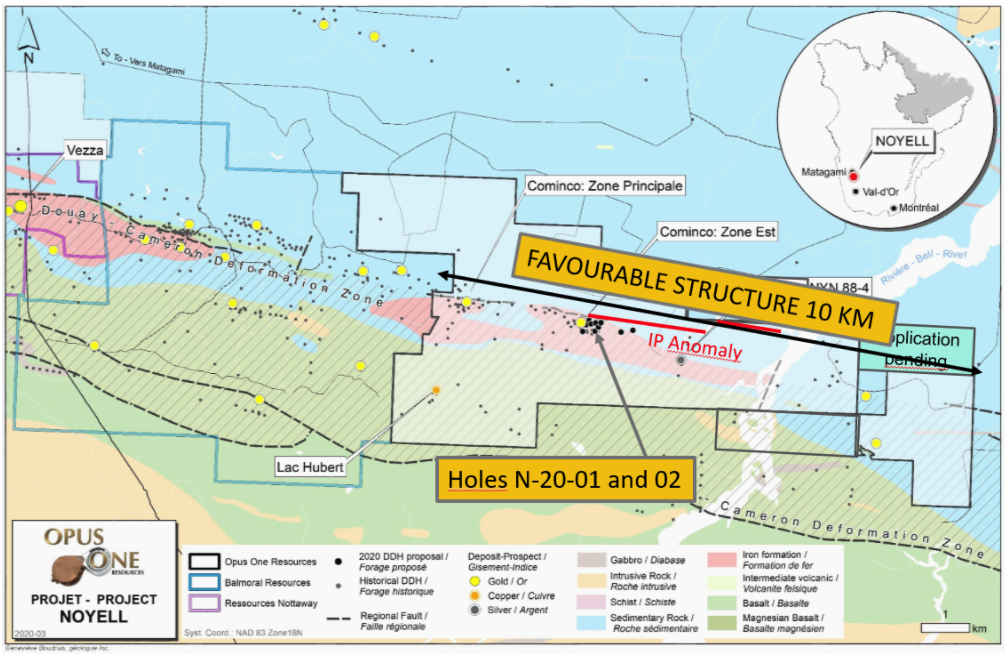 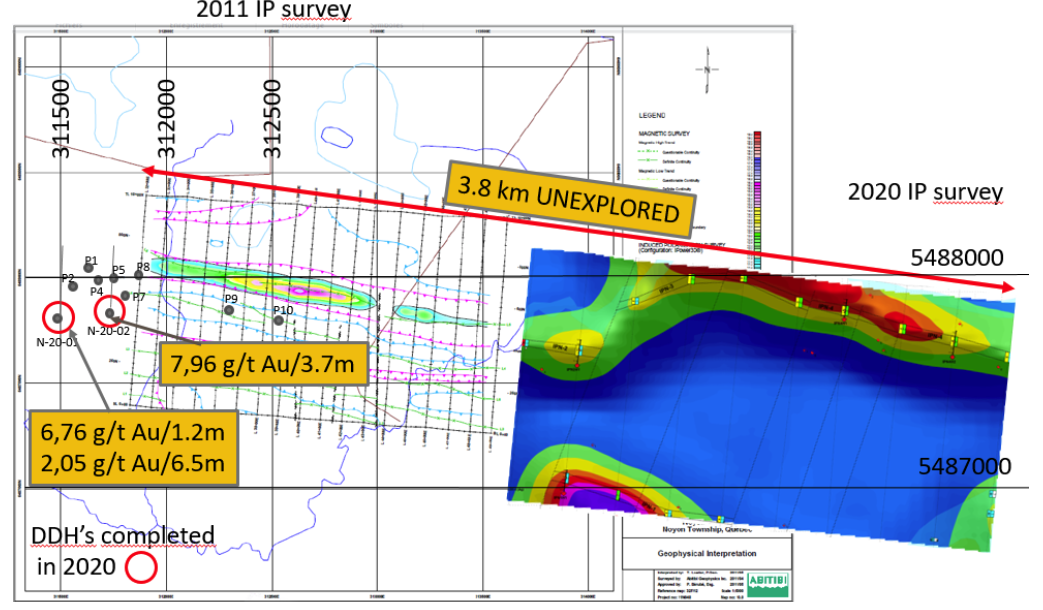