The Fecteau property is located in the south-central part of NTS map sheets 32G/03, immediately north of map sheet 32B14 and approximately 120 kilometres south of Chapais. The L-209 main lumber access road cuts through the central part of the property where several secondary lumber access roads provide easy access to most of the property. The claim block lies within the northeastern part of Buteux Township with a small portion extending into northwestern part of Marceau Township, within the Chibougamau Mining District, Province of Quebec.

The property consists of one claim block containing 107 claims for a total of 5,979.02 hectares in the Townships of Buteux and Marceau, and is located 132 kilometres east of the town of Quévillon. Gilbert Lamothe is the registered holder of 100% interest in the Fecteau claim block subject to an option agreement with Opus One Gold Corp.

The Fecteau Property is located in the southeast corner of the Urban-Bary Greenstone Belt (UBG) of the Abitibi Subprovince of the Archean Superior Province. The Urban-Barry Greenstone Belt is roughly 135 km long and varies from 4 to 20 km in width (Bandayayera D. 2004). It is bordered to the north by the Coapatina belt, to the south by the Barry Complex and the Souart Pluton. At its western extremity it is bordered by the Quévillon Group. To the east it is truncated by the northeast-southwest striking Grenville Province, where the east-west stratigraphy of the belt is abruptly terminated along the Grenville Front. The Front separates greenschist facies rocks of the UBG from upper amphibolite facies rocks of the Grenville Province.

The property is located in the southeastern part of a polycyclic volcanic belt (Bandayayera 2004). The stratigraphy is dominated by massive and pillowed mafic lava flows locally interbedded with or crosscut by mafic co-magmatic sills or dykes. Several minor felsic to intermediate volcanic units and felsic to intermediate tuff horizons are intercalated in the belt stratigraphy.

The Fecteau property is underlain by massive and pillowed mafic to intermediate volcanics of the Fecteau Formation. Basalt and Basaltic-Andesites predominate and include massive fine grain units with gabbroic/dioritic textures and pillowed flows. No polarity could be determined. The volcanic rocks are locally intercalated with volcaniclastics/sediments, which occur on the north flank of the east trending Lac Fecteau Synform. The tuffaceous units consist in a series of felsic volcanic and volcaniclastic rock units intercalated with metric units of graphitic mudstone and shales with disseminated, nodular and massive sulfide (PY-PO) lenses. These conductive units respond well to geophysical electromagnetic methods. Several were located while prospecting with a Beep Map in areas of thin overburden and a number were drill tested by previous exploration companies.

The Fecteau property is located to the east of some major gold deposits being actively developed (Windfall and Barry deposits). To date there are no deposits with defined resources within the Fecteau Property. However, several gold showings occur containing similar geological and structural context to known deposits. The following showing descriptions highlight the potential of the Fecteau property to host gold and/or base metal deposits.

The trenching program exposed a mineralized quartz vein and associated quartz stockwork surrounded by a large and strong alteration halo that was the focus of the 2018 drilling program. This follow-up drilling program was successful in defining the gold structure and highlighted that the Lac Fecteau Porphyry Auriferous Zone is continuous over the full length tested by the 2018 drilling program. Based on the trend of the zone it is now inferred to correlate with the LF12-02 gold showing found by Hinterland in 2012, 450 meters to the east along strike. The east-west shear zone transects the local stratigraphy of Lac Fecteau Syncline and may be a conjugate structure related to the Frank fault which defines the southern boundary of the greenstone belt with the Barry complex

Inlandsis completed a reconnaissance and a follow-up till sampling program over the Fecteau property and defined five target areas (A, B, C, D & E) as the potential source areas for the gold grains found in till. Based on these results Opus One completed three dipole-dipole induced polarization survey grids over the areas identified as the source areas of the gold grains. IP survey Grid-A covered gold grain Target-A and E while IP survey Grid B and D covered gold grain Targets-B and D respectively. Gold grain Target-C was not followed-up during this phase of exploration.

The source of the gold in the till was not identified. The IP survey identified four IP anomalies on this target. (PP-1, PP-2, PP-3 and PP-4). The nature of the anomalies PP-1 and PP-2 were explained by sulfide bearing graphitic units outcropping along the lumber access road and drilled by both Soquem and Vior previously between IP Grids B and D. However, anomaly PP-3 and PP-4 remains unexplained. IP anomaly PP-4 lies up-ice of the gold in till and should be tested by drilling to explain the nature of the anomaly.

No ground geophysics or prospecting was done on Gold Target-C as it is located near the eastern boundary of the property and not easily accessible.

The source of the gold in the till was not identified. The IP survey identified three IP anomalies on this target. (PP-1, PP-2 and PP-3). The nature of anomaly PP-2 appears to be the same sulfide bearing graphitic horizon identified along the lumber access road east of IP Grid-D and west of IP Grid-B. However, anomalies PP-1 and PP-3 remain unexplained and lies up-ice of the gold in till.

Gold in till anomaly Target-E was not completely covered by the IP survey Grid-A and due to heavy overburden, no rock samples were collected on this target. The source of the gold in till anomaly remains unexplained. IP anomaly PP-7 remains a potential source area for the gold grains found in the till. 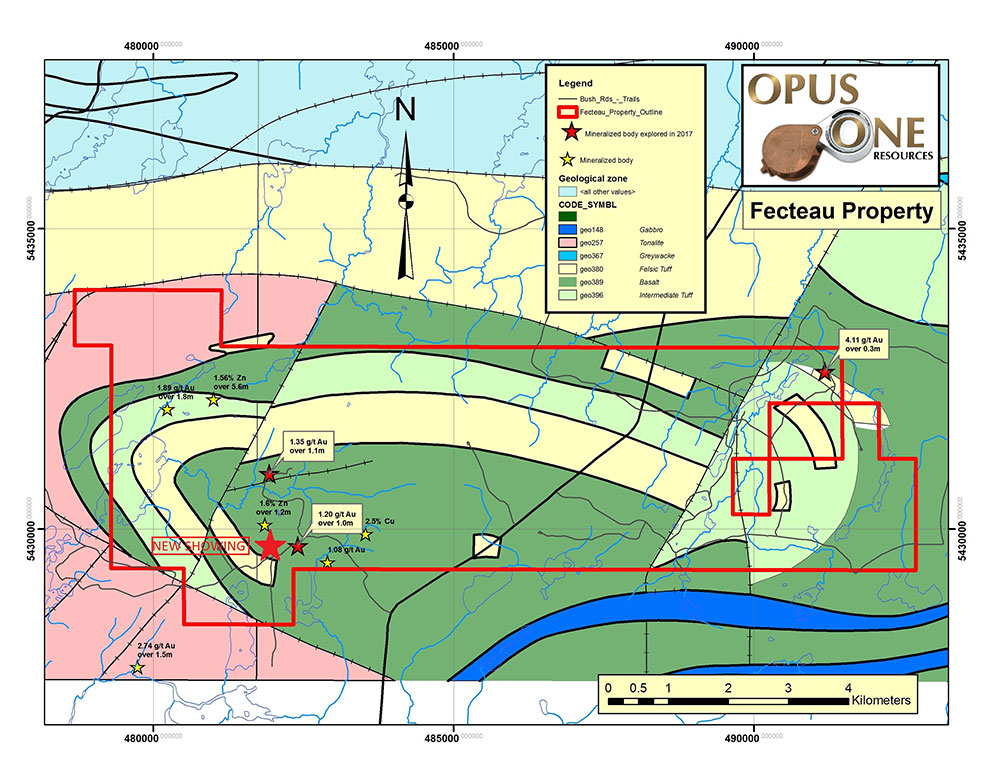 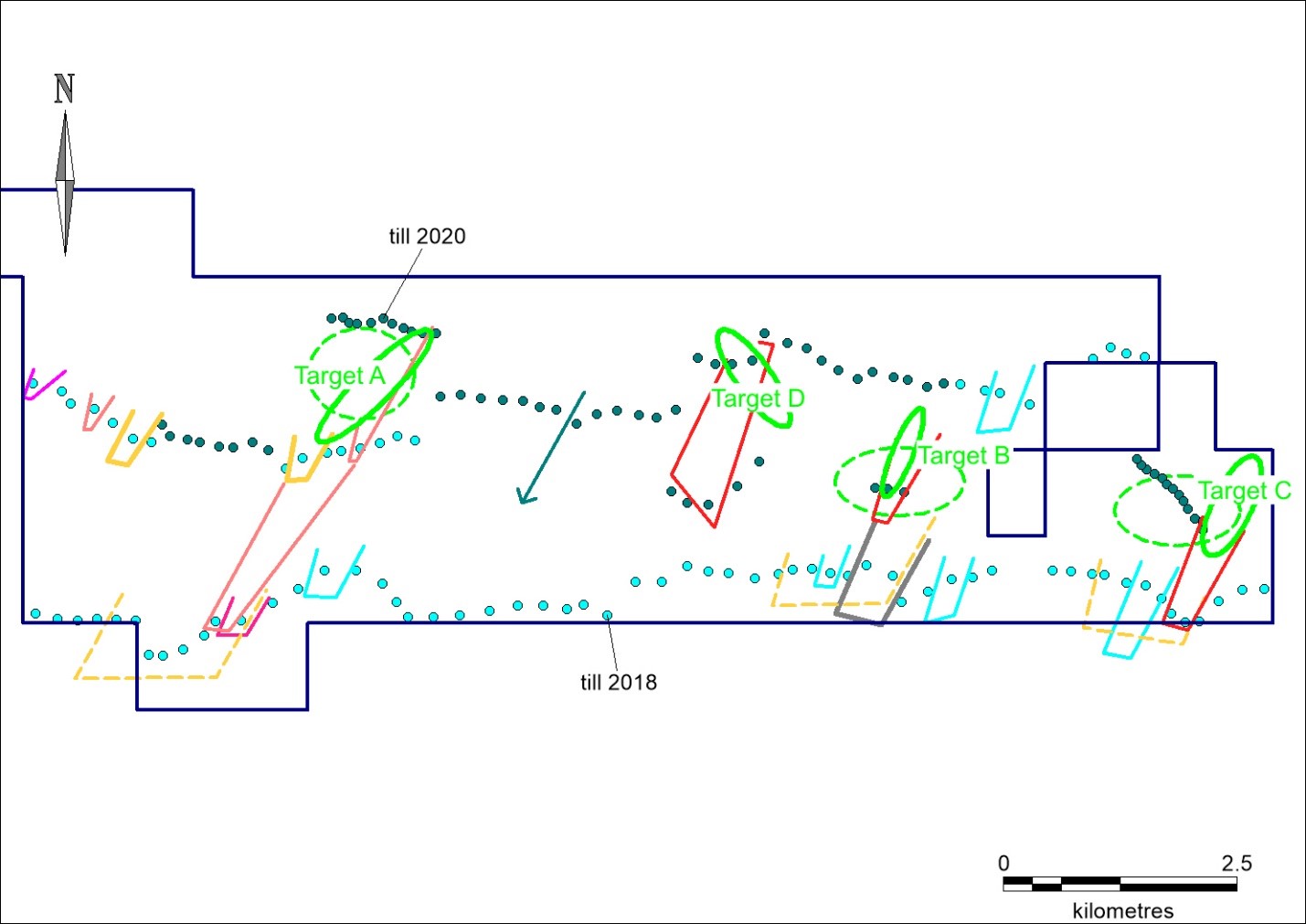 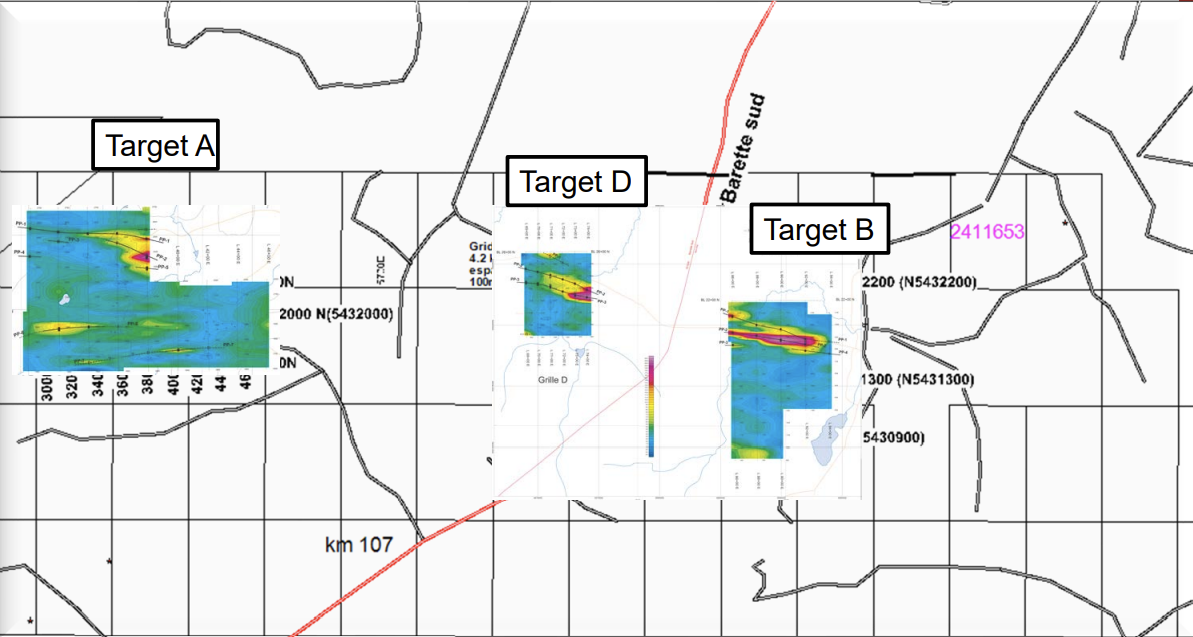