MONTREAL, April 12, 2019 – OPUS ONE Resources Inc. (OOR – TSXV) and MAGNA TERRA Minerals Inc. (MTT-TSXV) are pleased to announce that they have entered into an Option Agreement (the “Agreement”) regarding Magna Terra’s Noyell Property located along the Douay-Cameron deformation corridor (south of the Casa Berardi Break) near the currently producing Vezza gold mine.

The Noyell Property (the “Property”), which covers an area of 2,536 hectares, is currently 100% owned by Magna Terra (the “Optionor”).  Under the terms of the Agreement; Opus One (the “Optionee”) can acquire a 100% interest in the Property by paying Magna Terra a total amount of $500,000 (in cash, or in shares of the Optionee, or a combination of both at its sole discretion, subject to the issuance of a maximum of 7 million common shares of the Optionee) over a five (5) year period as follows:

The Agreement remains subject to the approval of the TSX Venture Exchange.

The Noyell Property is found within the Douay-Cameron deformation corridor (just south of the interpreted Casa Berardi Break) which hosts the Douay deposit, 35 km to the west of the property, and the currently producing Vezza Mine (past production approximately 800,000 tons @ 4,5 gpt Au), located some 8 km to the west of Noyell, according to Valere Larouche, Vezza Mine geologist.

Numerous gold occurrences have been discovered by drilling on the Property in the past twenty years, first by Cominco Ltd., then by SOQUEM, and then Normabec Mining Resources. Gold is found in three geological environments: 1) close or within sulphide facies Iron Formations and cherts. 2) within sheared metasediments and 3) within a graphitic fault. It shall be noted that the Vezza mine horizon (contact between a band of mafic volcanics and sediments) has not been properly explored (if present) on the Property.

The Property covers approximately 5 km of strike of the favorable stratigraphy.  Two zones have been defined in previous drilling programs: the West and East zones.  Historical mineralized intervals range from less than 1 gpt Au up to 14 gpt Au over a maximum width of 3 meters. (Source: Governement files; Examine)

During the course of winter 2007, 10 boreholes consisting of 2,892 total metres of drilling were completed [Examine], all in the eastern portion of the property (see table below). Significant results were obtained in several boreholes suggesting strong intersections of interest in the property’s mineralised structures. In December 2008 a magnetic Survey was completed on the claims staked in 2007 on the eastern part of the property (Examine). This Survey confirmed the iron formations that carry gold mineralization continued toward the East.

During the winter of 2011, Catlee Resources conducted an induced polarization survey (IPower 3D) on the eastern part of the property (claims staked in 2007, 18 kilometres of line). This survey confirmed that the mineralised zone, which was the focus of the most 2007 boreholes on the property, might continue through this portion of the property in the ESE direction, and could still be open to the east. (Source: Government files; Examine)

All other holes of the drilling program were either abandoned prematurely or not drilled.  The 2007 samples were analyzed by FA with gravity finish at Expert Laboratory (certified) located in Rouyn-Noranda, Quebec. Mr. Pierre O’Dowd, a Qualified Person under NI 43-101 has verified the 2007 drilling, sampling and assay results reported in this release. A QAQC program was implemented during the drilling program and blanks and certified material (standards) were incorporated to the regular samples.  The QAQC program was considered satisfactory by the QP.

Mr. Louis Morin, CEO, of Opus one states: “Opus One is pleased to acquire the Noyell Property as it already controls two strategically located properties in this highly favorable environment for gold Exploration: The Vezza Extension property that hosts approximately 10 km of strike of the Douay-Cameron corridor, just west of the Vezza gold mine, and the Vezza North property located just north of the latter and covers approximately 15 km of strike of the interpreted Casa Berardi Break.  These two properties as well as the newly acquired one constitute a highly prospective package of projects along two well recognized gold bearing structures in the Abitibi.  As for the Noyell Property, the Vezza mine horizon has not been properly explored on the Vezza Extension property. Recent drilling on the Property was aimed at geophysical anomalies rather than favorable contacts. “

Pierre O’Dowd, P. Geo, independent consulting geologist, acts as a Qualified Person as defined in National Instrument 43-101 and has reviewed and approved the technical information in this press release.

About OPUS ONE Resources Inc.

Opus One Resources Inc. is a mining exploration company focused on discovering high quality gold and base metals deposits within strategically located properties in proven mining camps, close to existing mines in the Abitibi Greenstone Belt, north-western Quebec and north-eastern Ontario – one of the most prolific gold mining areas in the world. Opus One holds assets in Val-d’Or, Matagami and Chibougamau areas. Opus controls a 90% to 100% interest in the following projects:

Magna Terra Minerals Inc. is a precious metals focused exploration company, headquartered in Toronto, Canada. Magna Terra (MTT) has a significant interest in the province of Santa Cruz, Argentina within the prolific Deseado Massif in southern Patagonia. With five district scale drill ready projects, and a highly experienced management and exploration team, MTT is positioned to deliver significant shareholder value through the potential for precious metals discovery(s) on its extensive portfolio. For detailed information regarding our projects, please visit the Company’s website at: www.magnaterraminerals.com 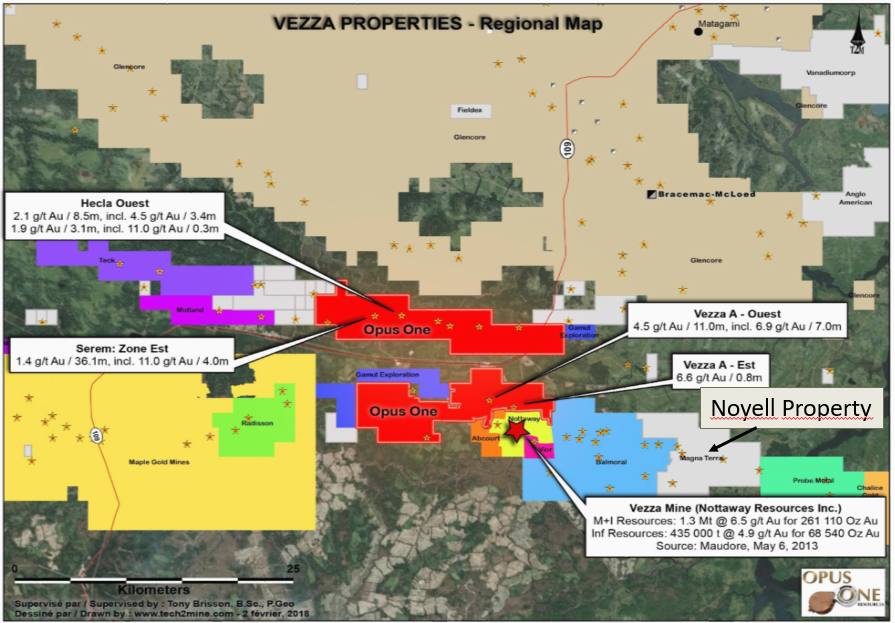