MONTREAL, QC, December 2, 2020 – Opus One Gold Corp (OOR : TSXV) (“Opus One Gold Corp” or the “Company”), a mining exploration company focused on discovering high quality gold and base metals deposits in accessible areas is providing a corporate update of its recent activities on its projects.

Opus One Gold Corp controls a large land package along the Casa-Berardi and Douay-Cameron Breaks, two major regional geological structures known to host mesothermal gold deposits. Three of our properties are located in this geological environment:

Following the success of the 2020 shortened drilling program on Noyell (because of Covid-19), the company is getting ready to resume drilling to follow up on the significant gold intercepts obtained in the central portion of the property as well as on untested IP anomalies defined in 2011 (previous operator) and in 2020 by Opus One.  These IP anomalies are very significant for the company as they are observed along the immediate eastern extension of the gold intercepts obtained earlier this year and they clearly appear to represent their eastern representation.  All contractors for the drilling program have been reserved and the permitting process has been finalized. Opus One Gold intends to start its drill program early in 2021.  The program should consist of 5,000 metres of drilling and 13 holes.  Eight holes will investigate the 2020 discovery area while 5 holes will test IP anomalies located from 0.5 to 3 km east of drill hole NO-20-02.

The drilling database was updated.

The drilling database was updated.

The 2018 till survey defined 3 world class gold targets with geochemical signatures similar to those from Windfall and Eleonore. Two of the three anomalous areas were not previously known to host gold mineralization. Regional sampling by Osisko Mining outlined additional gold targets on Fecteau. Results of these surveys represent a very significant development for the company. It opens new target areas for gold in the eastern portion of the property. Unique geology hosting a small felsic volcanic belt exhibiting strong evidences for VMS type mineralization in the Windfall district is hosted by Fecteau.

Field crews have been active all summer and fall on Fecteau.  A detailed till survey was completed in areas not previously covered as well as in areas were anomalies had been detected in the 2018 survey in order to further define these anomalies.  This year’s survey confirmed the three previously found anomalies and detected a fourth one.  A program of lithogeochemical sampling was also carried out to complete a previous survey performed in 2018 but never analyzed (lack of funds at the time).  Many results are still pending and they will be discussed when all samples have been properly analyzed and compiled.

In addition to the previous surveys, a crew was mobilized to further investigate gold anomalous areas and other showings (mostly base metals) on the property. Unfortunately, the crew could not find outcrops on the gold targets previously defined by the till sampling program (overburden covered).  On the other hand, several interesting base metal showings were found in the central portion of the property.  Assays for this prospecting work are pending.  The company has decided to carry out geophysical surveys (IP) over several of the targets defined during the summer.  Three grids are being cut and IP should be completed before year end.  This work should provide drilling targets for 2021.

Our Courville Property is located in the Quebec segment of the Abitibi Greenstone Belt some 50km to the northeast of Val-d’Or. 100% owned, it consists of 14 designated lots covering 561 hectares. The property is easily accessible through a well-maintained gravel road and can be worked year-round with no constraints.

All data pertaining to the Courville Property are being gathered, revisited, compiled, and digitized and a structural model will be produced soon.

OUTLOOK FOR THE NEXT QUARTER

The fall quarter is being used to compile and study results of the field season on Fecteau.  Geophysics (IP) was proposed for the end of the year.  We are gearing up for the winter drilling program on Noyell.  The 5,000-metre program should start in early January, as soon as terrain conditions allow access and the drill can be mobilized.

Pierre O’Dowd, P. Geo, [Independent Consulting geologist] acts as a Qualified Person as defined in National Instrument 43-101- Standards of Disclosure for Mineral Projects and has reviewed and approved the technical information in this press release. 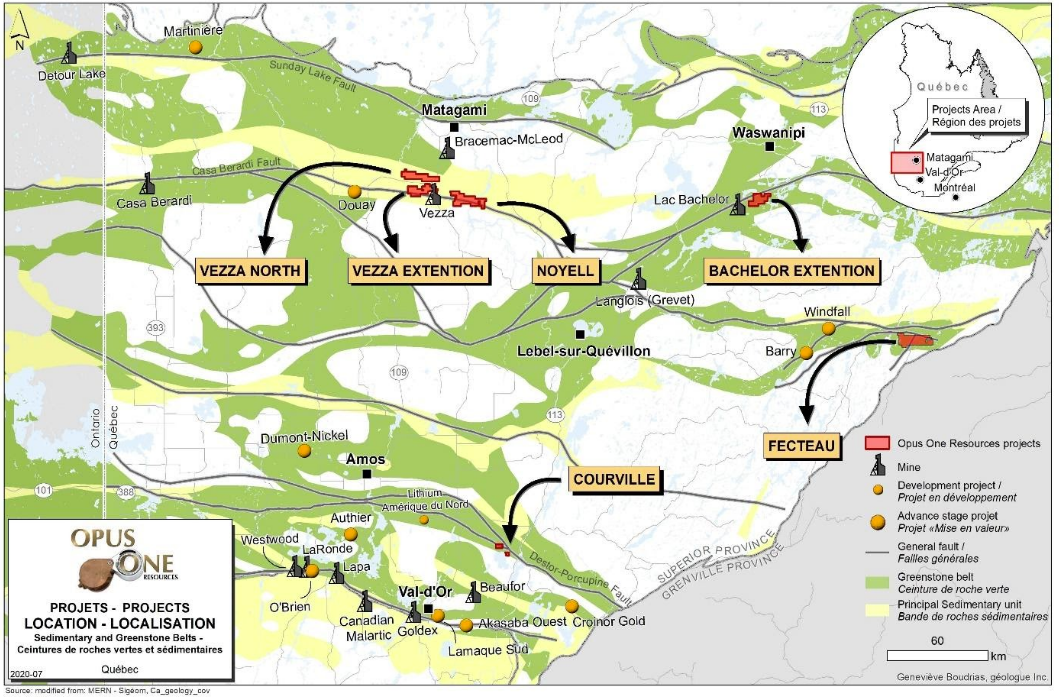