The Vezza Extension property (100% owned by Opus One Gold) is located 28 km south of Matagami and 151 km north of the town of Amos. The property (141 claims, 3027 hectares) is entirely contained in the Harricana-Turgeon Belt, an Archean volcano-sedimentary and plutonic rocks assemblage that constitutes the northern part of the Abitibi Greenstone Belt.

The claims of the Vezza Extension project are directly south of the provincial Road 109 between Amos and Matagami within NTS sheet 32F12. Several logging roads and trails run through the property, providing easy access. Access is also provided by the Vezza Mine gravel road access. The Allard River cut the property in the East central part.

Full infrastructure and experienced mining workforce are well-established in nearby mining towns such as Val d’Or, Malartic, Rouyn-Noranda, Lasarre, Amos, Matagami and Lebel-sur-Quévillon. Past or currently operating mines provide the immediate region with abundant specialized mining personnel and related mining industries. Experienced and general labour is readily available and well-trained including engineers, geologists, and technicians. These localities also host an excellent base of suppliers and manufacturers for the mining industry.

The Vezza Extension project is located in the north-central part of the Archean Abitibi Greenstone Belt, a subprovince of the Archean aged Superior Province of the Canadian Shield. The Abitibi Greenstone Belt is the most consistent unit (300 km by 700 km) and is probably one of the world’s best documented Archean supracrustal sequence (Dostal et Mueller 1996). This belt includes volcanosedimentary assemblages and granitic rocks of Archean age (> 2.5 Ga). The Abitibi Greenstone Belt was affected by a regional north-south compression. The volcanic sequences generally show east-west oriented synforms with synvolcanic and/or syntectonic plutons, alternating with east-west sedimentary sequences which tend to be unconformable. Most of the sedimentary and volcanic sequences dip steeply, with a regional subvertical schistosity generally oriented east-west. The volcano-sedimentary sequences are dissected by major structures of east-west direction. These structures are generally described as tectonic zones or deformation corridors of high amplitudes.

The Harricana-Turgeon Belt comprises the Matagami and Taïbi volcanosedimentary basins of east-west orientation. The Vezza Extension project is associated with the sedimentary basin of Taïbi which is limited on either side by major structures, namely the Taïbi Fault to the north and the Casa-Bérardi deformation zone to the south, the latter being followed by over 200 km with a thickness greater than five (5) km. As one moves to the east, this ductile structure becomes the

The sedimentary domain of Taïbi is composed of clastic sediments (sandstone, siltstone and mudstone, locally) associated with turbidites sequences. Iron formations of Algoma type (magnetite chert, jaspe), conglomerates composed of fragments from intrusive (diorite and tonalite) and volcanites (andesite) as well as graphitic argillite levels of kilometric extension are also found in lesser proportions. Mafic volcanic flows (basalt and andesite) and some pyritised rhyolitic tuffs horizons are intercalated in the sedimentary sequence, in a proportion of 10 to 20%. The stratigraphy is roughly oriented east-west, with polarity towards north and dips from 70° to 75° towards south.

The main interest of Vezza Extension property is its proximity to the Vezza deposit located less than 2 km east of Vezza Extension The interpreted westward extension of this favorable stratigraphy and the presence of two auriferous deformation corridors, Douay-Cameron/Casa-Berardi which can be followed over more than 10 km, makes this ground very prospective for gold.

The geological data of the property is only based on diamond drilling as very few outcrops were observed. The property is mostly overlain by the Cartwright Volcanic Domain and the Taibi sedimentary domain. The stratigraphy strikes east-west (N90° – N100°) and dips towards south at approximately 75°. The volcanic rocks of the Cartwright Domain are interpreted as lava plains (Lacroix et. al, 1990 and Gauthier et. al, 1997). The Taibi sequence lies conformably on the Cartwright sequence and represent a deep marine environment (Lacroix et al. 1990).

As discussed above, the Taibi sedimentary domain is composed of clastic sediments associated to turbidite sequences, with 10 to 20% of mafic volcanic flows and minor pyritised rhyolitic tuffs horizons intercalated within the sediments. The volcanic bands can reach several hundreds of meters in thickness. They strike N100° with polarities towards north and dips from 70° à 75° towards south. On Vezza Extension property, an important felsic band was found in the south portion of the property, with horizons of gold-bearing pyritic massive sulphides intersected in hole 60-98-04 and 93-VB-01 and returning values of 2.4 g/t Au over 0.5 m, 1.5 g/t Au over 0.7 m and 1.1 g/t Au over 2.0 m.

The Vezza Extension property contains the Casa-Berardi /Douay-Cameron deformation corridor for approximately 10 km. This deformation zone straddles the contact between the Taibi sediments and the Cartwright volcanic rocks.

Several auriferous zones of interest are found on the property. In the southeastern part, Agnico Eagle drilled several notable gold intersections, including:

Hole VZ-04 was drilled 50m below Agnico Eagle historical hole 89-VZA-08 located in the Vezza A showings area which reported 6.9g/t Au over 7.0m. The hole intersected a well-preserved sequence of pillowed, locally brecciated basalt from 19.2m to 80.6m followed by a massive gabbroic intrusive from 80.6m to 134.3m and ended in a finely bedded wacke (with arenites and mudstone) from 134.3m to 150.0m. Significant results were related to quartz ±tourmaline ±carbonate with minor quantity of sulfides (pyrite and arsenopyrite generally less than 5%). A 36cm quartz and magnetite vein with 5% pyrite reported 2.86g/t over 0.5m at 32.0m. Another 13cm smoky quartz vein with trace of arsenopyrite assayed 1.21g/t over 0.5m at 142.3m. 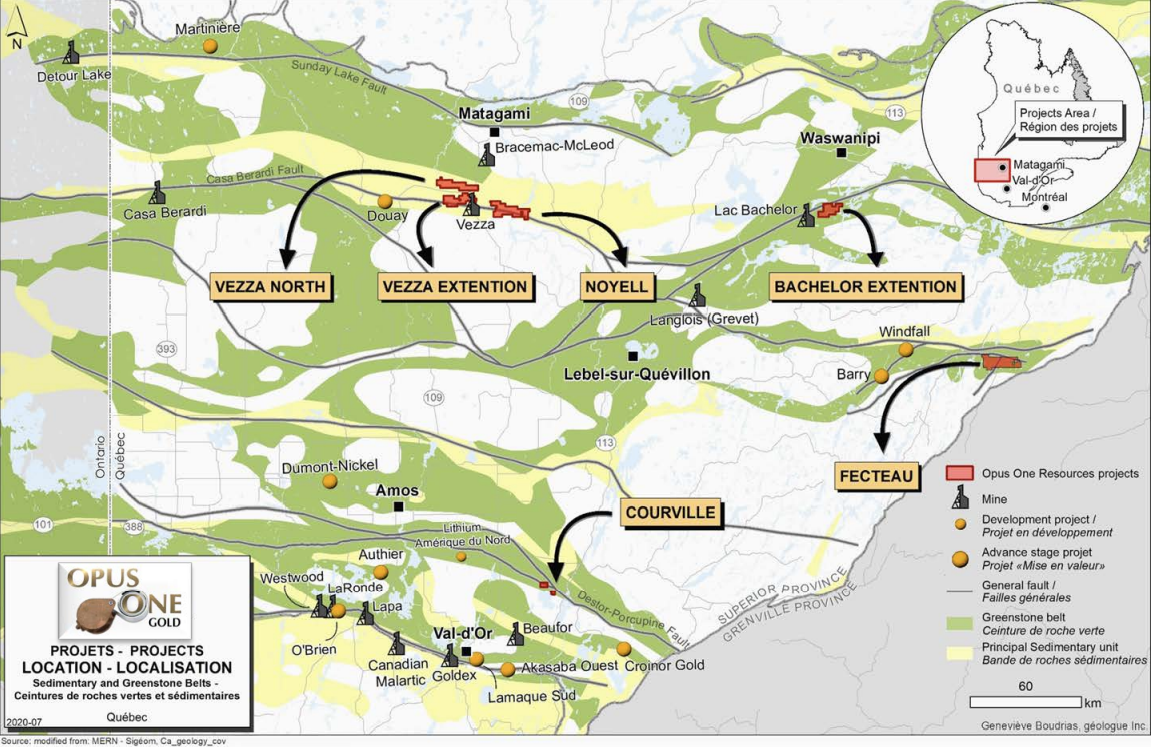 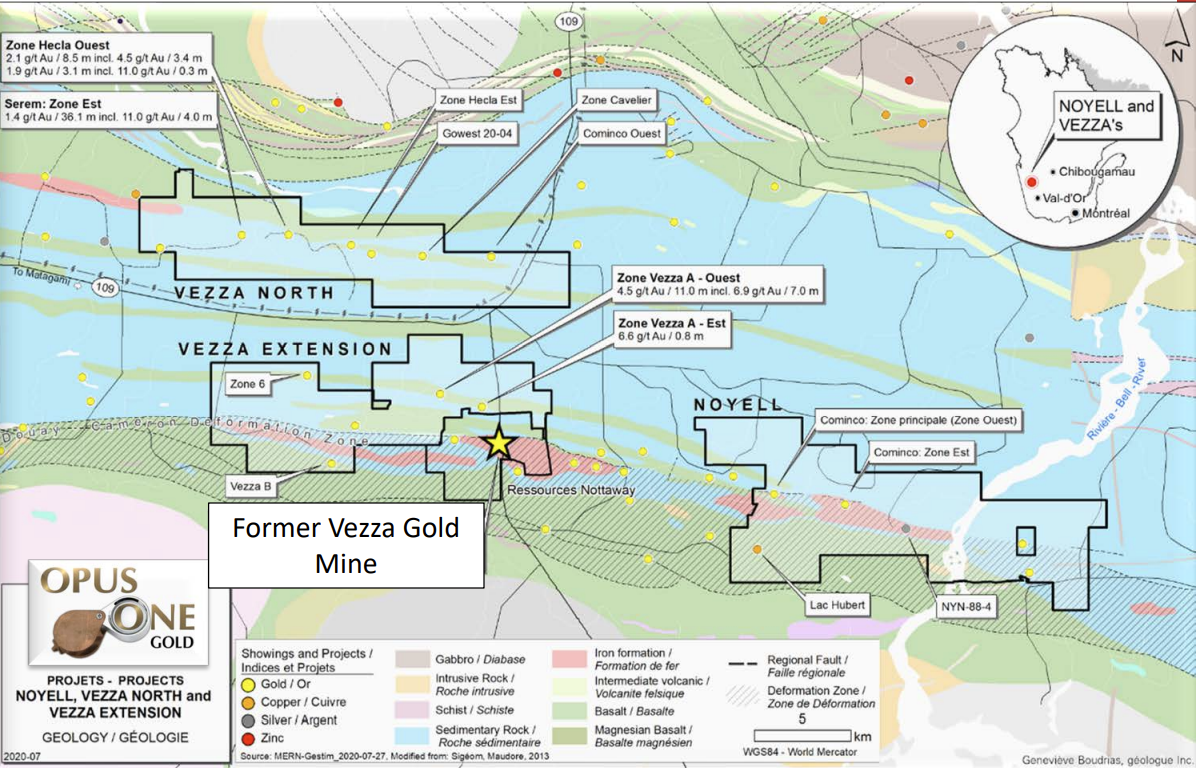 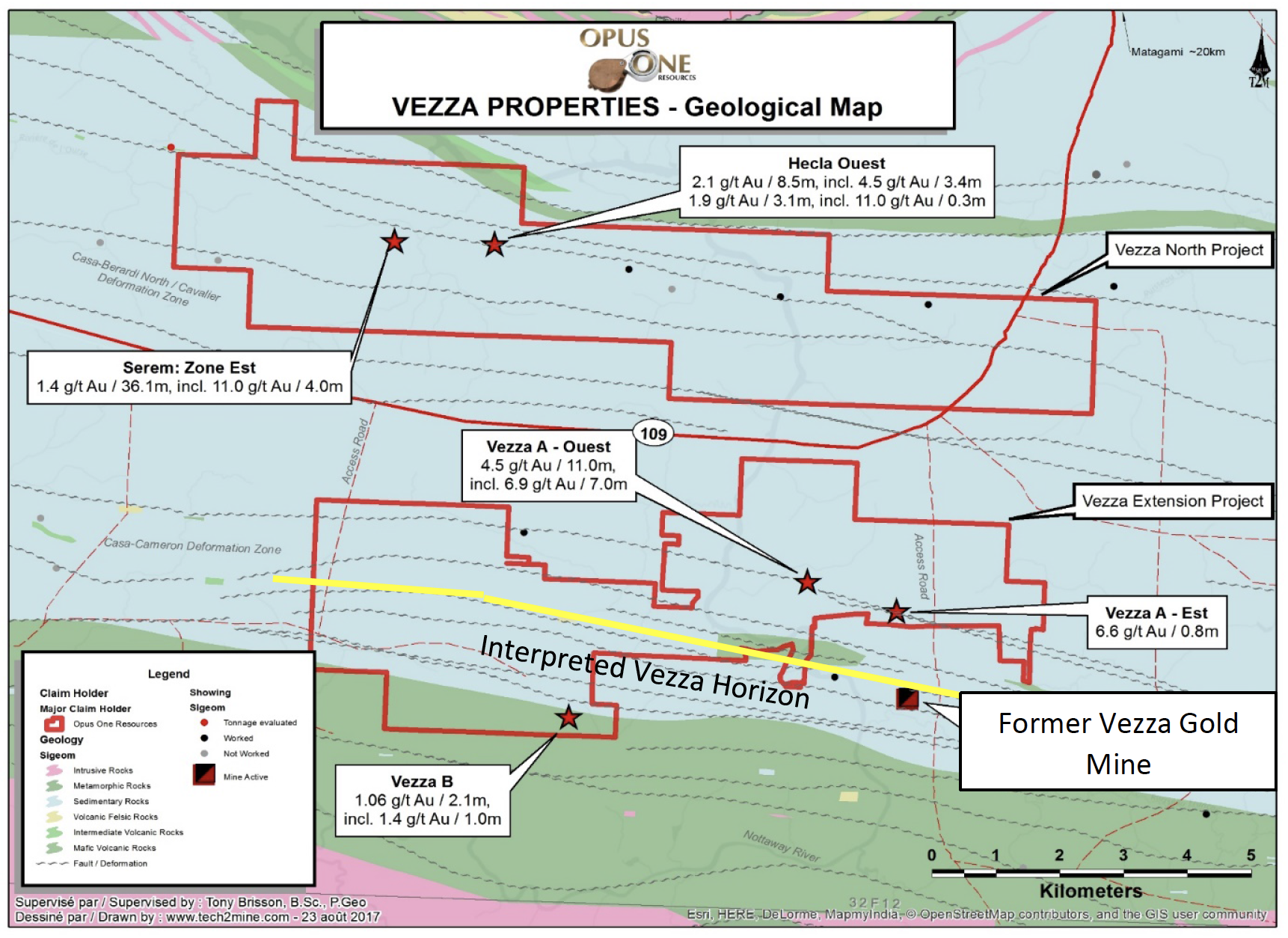 Hole VZ-06 was designed to test a moderate chargeabilty/resistive anomaly located 400m West of Zone 6 showing. The hole started in a sequence of wacke and argillite from 27.0m to 102.5m, including a small unit of felsic lapillis tuf (68.76m to 74.0m), then finished in a pillowed basalt from

In early 2022, Opus One Gold is performing an aerial high resolution magnetic survey over the entire property in order to obtain a better understanding of the property geology and generate new targets for a future drilling program.